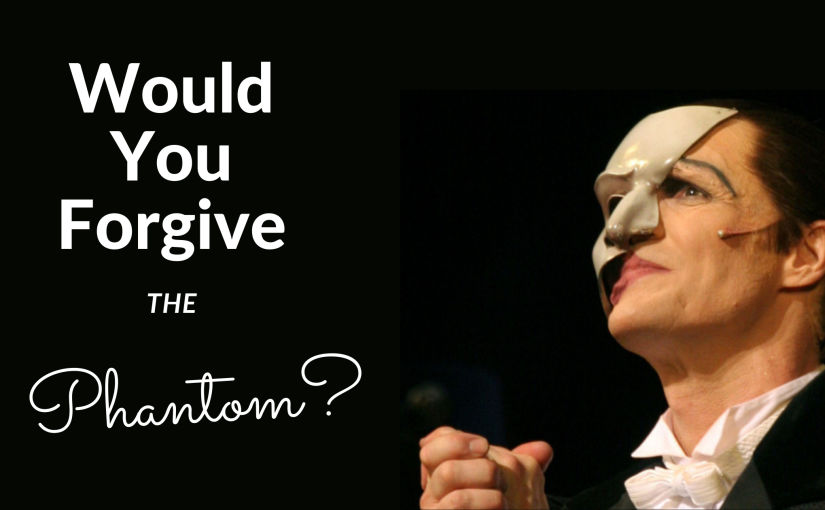 Every ten years or so, when the full moon wanes behind curls of fog … I return, return to the depths of my mind to conjure a memory, a melody, one I thought I had long forgotten, a place of melodramatic sighs, a place where compassion heals all wounds, a place where darkness can envelop me … and I remember singing …

Somewhat in honor of Lindsay Ellis’s retirement from YouTube, I’ve realized a few things about The Phantom of The Opera:

I had known that of course, but I came to realize just how much so recently.

It’s trash in much the same vein as Twilight or Fifty Shades, but with enough pretense for young women at the time to avoid scorn for liking it. This pulpy novel became a musical rife with sexual energy and pomp, but deserves to be looked back with a somewhat critical eye in much the same way.

It follows much of the same plot lines as either, with Eric crossing boundaries and threatening slightly more than either Edward or Christian.

People have harassed Twilight fans, Shades fans, reylo fans, and many other specifically white female loveboats. And yet, I don’t recall being mocked for loving Phantom; I even dressed as the Phantom for Halloween as a teenager. Instead of a group liking something completely pitted against a group being mocked for it, our culture seemed to be in agreement that this musical was good (at least, before the movie came out).

Perhaps it is because Eric the Phantom is framed as dangerous and bad? But that doesn’t stop our poor tween girls from lighting candles in honor of music senpai.

Am I about to go on a ramble about how Phantom is #abusive? That’s 2014 Tumblr logic, thoughtless algorithm wars not based in reality. Antis? Shippers? Whomst? You can’t just split the world down the center, with one group marked as problematic/sinners, and one marked as the pure cinnamon rolls/elect. The world does not work that way. Gain more nuance. Who do you think you are, John Calvin?

I hope – at minimum – we’ve moved on from that sixth-grade-straight-boy level of emotional intelligence. No, I am not going to blow the case wide open, detective, by saying that the murdering monster in the basement is a bad, bad man. That should be quite obvious.

When I say “it glorifies forgiveness,” I’m talking of the “fetishization” of forgiveness (to use a phrase of Roxane Gay), wherein the concepts of empathy and forgiveness of abusive wrongdoings are typically preached to ONLY certain groups ONLY about certain people.

Forgiveness is not even. It’s not even, Steven. Steven is likely to get away with more than Julia. If Steven is a white man, he’s more likely to get away with marijuana in his trunk than many of the brown people in this country, who can’t seem to get away with wearing hoodies or holding water bottles or buying a beer. A priest might be forgiven over and over for real-life instances of pedophilia but a young gay man will be stalked and unjustly accused of it at the podium if he tries to run for office. Bill Cosby got out. Weinstein isn’t going to get nearly what he deserves. And Lindsay Ellis was bullied off of YouTube.

No, we must not cut our lines between evil and good, wherein evil is forever condemned and good is forever protected; humanity has done that for thousands of years, and no such utopia has resulted.

Forgiveness is – yes! – divine. Forgiveness congeals culture, keeps us together, and keeps the world from falling apart. It can mend ties and broken relationships. It can allow for the ending of self-inflicting pain. Forgiveness is a powerful virtue and ultimately a positive and wonderful thing. Let’s not sink into this weird #extremelyonline logic where once you are damned, you are forever damned, even if it’s tweets or posts from twenty years ago.

But we must be wiser about it.

Who we forgive, for what, and how much, defines culture.

When I say that The Phantom of the Opera “glorifies” forgiveness, the problem is not that the Phantom is #abusive (of course he is … he’s a murderer, seriously?!), it’s that the core story – the theme – is entirely dependent on a young woman who’s been mentally, emotionally, sexually, and spiritually abused to forgive a volatile and violent old man just because he has a sad backstory.

And we’re glorifying forgiveness in front of a group that rather shouldn’t get that message: teenaged girls. In one ultimate show of compassion, Christine Daae quells the beast that is an angry, murderous, stalking monster who has threatened her into marrying him, and that one act is enough to halt the speeding train of highly destructive behavior. Smooch. Your better now. It’s not great.

Now I’m all for humanist attitudes of providing people with their needs, base affection being an important need, but I must suggest this thought experiment:

What if Christine Daae didn’t kiss him? Would the audience hate her? Would we hold her responsible somehow? What if she stormed off like a diva? She had every damn right to. Would she be as hated as Carlotta?

This may seem like an obvious statement, but forgiveness is enforced/preached to more to those in oppressed groups.

When we say things like “forgiveness is divine,” it ends up creating cloisters of in-group forgiveness vs. out-group vindictiveness.

In other words, if you love your group, you’ll forgive, or else you will be evil – because you’re not forgiving, and forgiving is divine! Why would you be evil and not forgive him, CHRISTINE?!

This is a breeding ground for narcissistic behaviors. “Forgiveness” is absolutely vital for the abusive cycle to continue. If a mere lack of forgiveness – rather than any specific sin! – gets you kicked out of a group, then it may have this mentality.

I see these groups as circles or mini-cults, and this may affect the real-world in ways like…

I, for one, believe that forgiveness is a gift, NOT something you can earn. If you can earn it, then it can be bought by social capital, which it should not be.

When having these conversations in the real world, ask yourself: Is it safe for the person if they do NOT forgive me/us/the organization? Are they allowed to not forgive, or is forgiveness a compulsion/demand?

Do they have an option, or are they twisted every way?

I think, however, that saying this is ONLY a fetishization of forgiveness may be a little limiting/a misread of the text. Christine takes her power back in the only way she can. She’s not passive here, when she decides to tell the Phantom that she understands, that he’s “not alone” in feeling trapped. Arguably she’s led by the nose throughout the story for the most part, but her final act of forgiveness is her active participation in it. Real, true forgiveness and understand can’t be bought. It is hers to give or not give.

3. But secretly … secretly … we’re meant to see ourselves in the abuser too.

Eric is a child. By that I mean he is the ultimate definition of an emotionally stunted person. His lack of love at an early age has lead him to behave like a dangerous, clever toddler who wants mommy’s attention.

But let’s not be all “men-vs-women” about this; the secret of the Phantom is that … many girls relate to the Phantom. It’s almost like unloved girls can feel childish too.

Now, sure, I feel that a lot of women feel like they’re raising their partners, that they had to teach themselves about emotional health and now therefore have to teach the therapy-hating men in their lives the same things. It can be extremely exhausting to be a Christine. And I love, LOVE saying that Eric, by his very definition, is the OG (opera ghost) incel.

But the experience of being a Phantom is not limited to 1: being a man, 2: being in a romantic relationship, 3: feeling (or knowing that you feel) unloved, or 4: being any good at music hey hey hey hey.

Let us examine the strategies we see our Phantom use to “earn” Christine’s love:

Anyone can relate to some of these things or see the behaviors in themselves if they’re stunted, stressed, or irresponsible, whether you’re being needy with an online acquaintance or trying to get the attention of a lost relative. This is what’s fascinating about the story. It’s, unfortunately, relatable. No, we haven’t all done a murder or extorted a Paris opera house, but we have likely done a few things on the above list. Phantom is a very human baddie. There’s consistent reasons to why he’s doing what he’s doing.

Unlike Edward or Christian, Eric takes the blue pill (wait did I get that right?) and actually learns how to grow up.

The *kiss* moment is quintessentially unearned, in that forgiveness isn’t often earned.

Eric experiences the full humility of this, somehow. He seems to understand at once how rare and precious the concept of forgiveness is in the first place. That he had no chance of ever “earning” it if it wasn’t given outright. That no one ever, ever, is guaranteed love for good or bad behavior. Christine is offering actual compassion rather than affection being born from compulsion, and it is better.

He has a healthy amount of guilt. He realizes that this other person should have the freedom that he’s been denied. He realizes that his controlling behavior isn’t, in the long run, going to get him love, because love is fickle and does what it wants.

(Why didn’t he understand this earlier? Eric should have watched Carmen more. Didn’t he live in the opera? I don’t know.)

I think this is the real genius of Broadway’s The Phantom of the Opera and what gives it its staying power. We get to be Eric, and experience love and understanding and forgiveness despite us feeling frantic and lonely and at our worst. We get to be Christine and take the power back from an impossible situation, in which her spiritual, physical, mental, and emotional state has been controlled by others around her, and yet she still gets to experience dignity. And we get to walk away from the theater to go buy cheesecake believing that love will save the day.

While I don’t think the real world can be fixed by one good smooch, this is a kind of New-York-grown optimism that is infectious.

2 thoughts on “Eric, the OG Incel, and the Fetishization of Forgiveness”